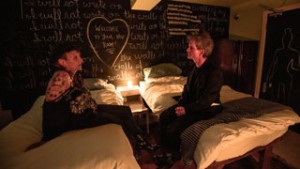 It is not like any festival I have ever attended, this festival of personal stories experienced intimately between the storyteller and just myself, plus another audience member. The revelations it brings about the power of stories will stay with me, possibly forever.

Battersea Arts Centre’s London Stories: A 1-on-1-on-1 Festival is uniquely positioned to become a most powerful form of participatory theatre. The idea is simple: begin with a sprawling building, like old municipal offices; invite in local people who feel they have life-changing experiences to tell about living their messy, complicated lives (that’s pretty much all of us), and organise ushers and staff to direct the moving traffic of paying audience members from story to story around the building.

The festival begins matter-of-factly enough. The audience stands at the foot of the marble staircase of the BAC, waiting to be called into the show. But then the black drapes barring the entrance onto the stairs serve as backdrop for BAC Artistic Director, David Jubb, to welcome us with a short explanation of how the A4 coloured card is our “ticket” and timetable for the evening’s performance of six stories from six storytellers. David further explains that we will experience the stories with three different audience members only (i.e. we share two stories with the same person), who are most likely to be no one we know. He informs us that the stories are performed all over the building, on the ground and first floor and in the basement, and quickly reassures us that we will receive assistance at every turn. I note how many of us are studying our coloured timetables with the same anxious look I feel I’m showing: “Right, what is it that he just said? Where do I go?”

With the curtains drawn, most of the audience walks up the staircase. A small group, of which I’m a member, is asked to move around to the right of the stairs and reach the first floor by an alternative route. I arrive before two seats outside a door displaying the title of the first story listed on my coloured card. The usher directs me to sit and wait to be shown into the room. This becomes the established pattern: the journey to the storyteller’s location, the short wait before entering the room, followed by the extraordinary intimacy of sharing a story with just a stranger.

What strikes me first on encountering the storytellers is their rawness and nervousness: these are not professional actors but well-rehearsed presentations. In this sense, the stories seem simultaneously both theirs and not theirs, created as they were through three weeks of workshop rehearsals and shaped for the purposes of this festival.  But nonetheless, I feel myself “just” listening: I’m listening to someone who like me has confronted illness, the death of a parent and the ethical dilemma of not knowing whether the way you acted was the best you could have done.

The storytellers I listen to, whose names I carry now in my memory as Hannah, Eleanor, Susannah, Lakeisha, Jane and Conrad, bring me into their lives. The “arts centre”, however, is their silent partner, making it possible for me to hear their voices. Each location with its “staged setting” supports their efforts to communicate their truth: for one story I sit in a dark space on one of only with three chairs: one occupied by Susannah describing her mother’s hospital bed.  For another I sit on the edge of one of two single beds with Jane sitting opposite me telling us of her love for her troubled husband whom she watched jump to his death, and  in another I sit on a bench in a passageway, looking at a young man, seated on a doorstep, telling how he has so far risen above the fate of men in his family who all seem destined to end up in gaol.

These are not just people chatting self-indulgently about their lives: these are storytellers practising an epic art form. I feel the stories like revelations. I feel their words hit my skin and I see my emotional responses flow back to the storyteller affecting the emotional tone of what is being said. I can only find compliments for any workshop rehearsal process which has given them the clarity with which they have shaped their stories: the economic use of language, the calling up of original metaphors and verbal dynamics are completely artful.

Wisely, the artistic director has designed a “spill out” room as the last destination, a space to just sit and have a cup of tea (free of charge) and speak about or write responses on card. David Jupp stands before us again, inviting us to place our written responses to individual stories on the artfully decorated boxes, which he calls “monuments” created by each storyteller. He reads a poem assembled from the workshops by the storytellers working as a collective.

The importance of London is held before us; lots of cities have a river flowing through them, but only London has the Thames. So I reflect on how the stories I have heard were told as if they flow through their London locations, carving out their unique path in the life of the city. The poem hits me as I recognise the edgy, messy wonder of the place.

Another revelation dawns on me. This is the first time I’ve experienced my role as an audience member as essential in the dramatic performance. It is the first time that I am not just part of “the audience”. Remarkably, the three audience members with whom I shared the experience did so as respectful strangers. Nonetheless, I remember them as vital to my experience of the stories: in one story I cried, so too did the other person; in another story we had agreed that, as older women and mothers, we wanted to take away our young storyteller’s conflict with her father. Interestingly, there were many exchanges of short, sharp expressions of “this is great theatre” between us. In the end, listening to stories about my fellow Londoners at the Battersea Arts Centre reveals how “inventing the future of theatre” is being realised there.