Julia Donaldson’s story about a little mouse on an epic journey returns to the West End stage, with lively performances all around. Eight-year-old Henry helps our reviewer dish out the stars for this recommended Christmas treat for young families. At the Lyric Theatre. 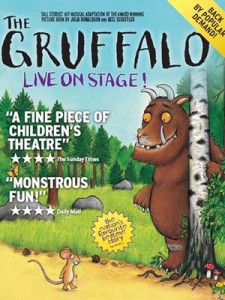 Julia Donaldson’s The Gruffalo has sold 10.5 million copies in 31 editions worldwide. Illustrated by Axel Scheffler, like all great stories it appears a beautifully simple one. It is about a mouse’s walk in the woods. Both author and illustrator have won numerous awards, including Donaldson’s appointment in 2011 as the UK’s Children’s Laureate.

Adapted for the stage by Tall Stories Theatre, the play of The Gruffalo has visited the West End for the past five years. It now returns to the Lyric Theatre, an occasion which was anticipated with excitement by my co-reviewers, eight-year-old Henry and his six-year-old brother, Elliot. As we take our seats we view an impressive golden rusty coloured forest, and Henry asks me for a pen and paper so he can record the production’s first star. He feasts on the spectacle – as do I.

As the lights dim and a gasp from the children in the theatre heralds the start of the performance, two men, dressed very plainly in grey working clothes, carry a small sleeping creature onto the stage. The cast of three – Susanna Jennings (Mouse), Tom Crook (The Gruffalo) and the Predators, played by Timothy Richey – is a strong ensemble, though very occasionally I felt that their ad-libbing was aimed at each other rather than the audience.

Henry was particularly impressed with Timothy Richey’s transformation from the second storyteller to fox, owl and snake. He thought the costuming was perfect in getting the sense of the different characters, and I too found the scripting and choreographing of the three roles clever, especially the anthropomorphic characterisation of the fox as a farmer-squire, the owl as a bomber commander and the snake as a hip-swinging Latin dancer.

Most impressively, I notice how this is part of an overall direction for delineating stage conventions from storytelling ones. For instance, the opening is performed as a kind of prologue that establishes the mouse-creature’s love of nuts. It is devised with all the banter of pantomime and the visual slickness of a magician’s act. This is not “the book” but a way of sharing the theme of the book with a live audience. Henry is completely engaged in unravelling the challenge facing the little mouse, who must face up to fear and risk in order to find her favourite food.

The real magic, however, happens as the dynamic storytellers continue to build and share Julia Donaldson’s text with the audience. Their grey workman-like outfits make perfect sense as they create the world of the story in which the forest and its creatures exist. The creative team of Creative Producer Toby Mitchell, Director Olivia Jacobs, Designer Isla Shaw and composers John Fiber and Andy Shaw inventively realise on stage the world built by Donaldson in The Gruffalo, while the script captures the rhythm of the original text.

The transformation of the main storyteller into the Gruffalo is all part of the constant transformations taking place which, thankfully for parents of children attached to the book, are anything but disappointing. Six-year-old Elliot checked out the authenticity of the monster on stage by unrolling the poster-cum-programme and scrutinising the bouncing mass of fur and purple spikes on stage against Axel Scheffler’s illustration. Luckily, the stage presentation passed the test.