I was lucky enough to view the creation of Circtacular by the creative team of staff and students of Wooranna Park Primary School, headed by Marianna Doherty and Debra Nugent.  Producing a whole school spectacular, which is also embedded in the school curriculum, is an amazing feat to achieve.  On the one hand, the work has to be entertaining and on the other, it must have an intrinsic value educationally speaking.  Speaking of the reactions around me, I believe that the finished theatrical production on Wednesday 5th September which the audience viewed achieved both distinctions: it was wonderfully entertaining and a true expression of the students’ work.

To begin my review, let me focus on the entertaining and engaging qualities of Circtacular, a ‘roadshow’ narrative in search of acts around Australia for an animal-free circus.  The pace of the spectacle was very good from the outset as the problem of the thoughtless animal trainer, Tom, had to be dealt with by Ringmaster Melbourne, Chairperson Ivanna and Head Animal Trainer Grace. They took up the challenge with zest and worked hard together not to be derailed by a trio of clowns (Jarrah, Milan & Skype) and a monkey (Alex).  What followed was a journey of epic proportions in which the whole continent was covered to find the talent they hoped would keep their circus alive.

As the circus executives and their caravan travelled the vastness of Australia, cruel Tom never missed a chance to try to foil the good guys.  However, in good pantomime tradition, his own misdeeds proved too silly to succeed.  Unfortunately for Tom, he had an uncanny way of giving himself away.  The character was played by Tess who brought the part alive with all her talents of disguise, fake accents and wacky schemes. You can imagine the audience’s relief when such a genius finally turned to the good side and rejoined the circus as an excellent acrobat. 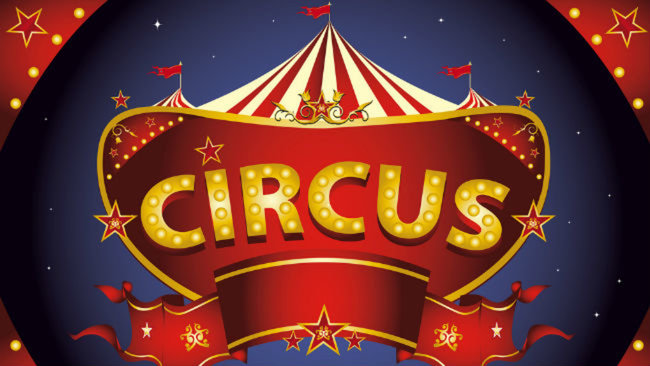 The variety of acts viewed along the way was a feast for the eyes. There were animals played by prep students who showed the audience how much they loved their freedom. Then there were Brisbane buskers, performed excellently by Year 4s, who enacted a ‘dance battle’. The second group of Year 4s enacted a superb mime sequence in which every member of the troupe stayed in character throughout a routine which took the audience back to an era of silent movies.

The Year 5/6s took on a daring theme all about risking everything, symbolise by a forbidden red button.  This was followed by another group of upper primary students who gave the audience a touch of Aesop’s animal fables. Later in the show, a third group of Year 5/6s performed an absolutely stunning acrobatic routine.

Year 1s created the environment of Longreach and showed how a community can go from feeling drab to feeling fabulous.  There was a display by Year 2 students who showed what it meant to never to give up, even when the Ringmaster rejects you. As the program notes say, they ended with “a strong message about being brave” and having their voices heard. Year 3s enacted a magic segment in which black and silver dazzled the audience as the timing of each trick highlighted the magicians’ talent.

Other talent found around Australia included a marvellous choir in Adelaide whose performance of A Million Dreams was dynamically entertaining.  The choir modulated their voices with great skill. Another group of dedicated dancers performed an evocative dance to Pink’s What About Us. It was extremely well executed.

We know that it’s important in a school production to include as many people as possible, to give the message that everyone in a school community is important.  But, speaking from experience, I know that this can seem a little false if the work which is needed to be done in a production is not really important. This is where the educational value of the school production becomes very important as the creative leaders of the show tap into the many talents of the children. Circtacular does this in very imaginative ways.

Firstly, by calling for the original work of children to imagine the acts in the circus, they enable students to face up to the big issue of treating animals with respect. What followed was that young people came to understand the relationship between ‘performers’ and ‘producers’ as they created costumes, props and stage scenery.  Senior students were also responsible for the script (Dylan, Filippos, Makayla, Joey, Jaidah, Alex, Sujay, Diya, Raghad & Skye)  and for devising the order in which the major characters appeared so that the narrative kept flowing along with the greatest interest. Students were also responsible for the stunning slideshow which served as the production’s backdrop. Beyond the stage, senior students assisted younger students with costumes, props and moving on and off the stage. They did this with a crew of committed staff members who worked tirelessly throughout the night.

The Brazillian theatre maker, Augusto Boal, said in the foreword of his famous book Games for Actors and Non-Actors (2005) that theatre is “the art of looking at ourselves”.  I believe that this maxim is wonderfully displayed in Circtacular. The production shows Wooranna Park Primary School looking at itself as a school community that values its students’ and staffs’ original ideas. It shows us a school looking at itself and asking how best it can come together for the good of students with diverse talents. When the finale arrives showing a chorus line of high-kicking dancers made up of staff members all involved in running the show, it is clear to all viewers that they had been watching a school at work and at play.

Undoubtedly, congratulations must go to Ms Marianna and Mrs Nugent but, I feel, they would be the first to deflect praise towards the ethos of their school, which continually looks to produce student-centred ways of working as a school community every day of the year.