This play, which tells the story of Albert Namatjira, the first indigenous Australian painter to win international acclaim, premiered in Alice Springs in late 2009 and has since toured Australia. Now, this fascinating story comes to London. At the Southbank Centre. 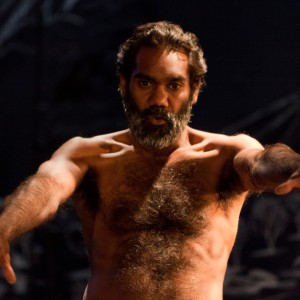 The production at the Southbank Centre of Namatjira by the Australian theatre company, Big hART, grows out of the company’s twenty-one-year history of producing theatre for social change. As a theatre historian who has followed the company for a great deal of that time, I have observed how it employs the arts to engage participants from every walk of life. To do this, its projects enable communities to learn skills in a variety of art forms (film, theatre, music, text, and new media) in projects that run for an average of six years. Most of all, the company strives to understand the complex challenges of Australia’s most marginalised communities, showing how complex problems require complex solutions.

The London season of the play is inspired by the fact that at the height of Albert Namatjira’s career he is presented with the Queen’s Coronation Medal in 1953 and, in turn, presents a painting on meeting the monarch in Canberra in 1954. On the day of the London opening, the Namatjira family, represented by grandson Kevin and granddaughter Lenie, together with actor Trevor Jamieson, Derik Lynch and artistic director/ playwright Scott Rankin are given a private audience with the Queen and Prince Phillip, who have since become collectors of Namatjira paintings by both Albert and his son Oscar.

While clearly political and didactic in its aims, however, the ninety-minute two-hander is equally uncompromising in its intentions to create an entertaining theatrical experience. An evocative play set against a gigantic backdrop of Namatjira’s painting of ghost gums and distant MacDonnell Ranges, the drama raises questions about what it means to acquire fame and fortune when a culture is confronted with inequality and injustice.  As the audience enters the auditorium, the immense physical landscape, now transplanted to the Southbank’s Purcell Room, is alive as it continues to be drawn by Kevin and Lenie Namatjira, who are water colour painters in their own right, as shown by the thirty works by them for sale in the Queen Elizabeth Hall foyer.

Further downstage, four other figures are visible: a young aboriginal man (Derik Lynch) sits staring out at the audience, a violinist is downstage right (Nicole Forsyth) and centre stage left portrait artist (Robert Hannaford) paints a seated Aboriginal man (Trevor Jamieson). Jamieson plays many roles, arising from his portrayal of Albert. Later, Jamieson introduces each of the participants to the audience and jokingly points out that Forsyth and Hannaford are not Aborigines. In the centre of the stage stands a large rock slab, reminiscent of the MacDonnell Range geography. It will be transformed in the drama into a lookout point, an altar and a morgue slab. Through the transformation comes a growing realisation that it is a human necessity that draws people together.

The story begins at the turn of the 20th century as Elea is given the Christian name of “Albert” by the missionaries. Later, it is the young man’s encounter and subsequent friendship with watercolour painter and WW1 veteran Rex Batterbee that brings him to the attention of Melbourne art circles of the 1930s. The story leads on to show how even though Namatjira never stops painting (he produces 2000 paintings in his lifetime) and supports over 600 people within his community, at the time of his death in 1959 he not only returns to being penniless but dies a tormented man because of being ceaselessly called upon to give his family money. Furthermore, as Australia’s only Aboriginal citizen (Aboriginal people received Australian citizenship in 1967) and therefore the only Aboriginal permitted to buy alcohol, he is prosecuted and imprisoned for supplying his people with “grog”.

The story then goes further than these facts and explores the anomaly of finding Germans preaching Christian love to Arrernte Aboriginal people within an English-speaking dominion. Within this context, it reveals how the most innocent of gestures by missionaries of replacing Elea’s Aboriginal name with Albert arises out of a careless, well-meaning cultural imperialist belief that indigenous people are sub-humans, part of Australia’s rather odd flora and fauna of kangaroo and koala bear.

Arguably, the main strength of Namatjira is Rankin’s dramaturgical knowledge: this fuels his playwrighting and the play’s designs by Genevieve Dugard (set), Tess Schofield (costume), Nigel Levings (lighting) and Jim Atkins (sound). In Namatjira, Rankin focuses on the storyteller’s monologue interspersed with dialogue from a second actor. Trevor Jamieson and Derik Lynch take on a least a dozen roles between them. Interestingly, Derik plays female roles of Albert’s wife, the Melbourne female art aficionado and the young Queen Elizabeth. The subversiveness of cross-dressing is layered on an inverse of comic mocking of painting blackfaces in the “Black and White Minstrel Show”. Jamieson works the joke beautifully as he asks the audience if they like his portrayal of whitefellas. He also provocatively asks whether he should have painted his face white. Furthermore, Rankin builds interest through dozens of transitions between narrative episodes, songs and comic routines.

In the midst of all the complicated story lives Albert’s friendship with fellow painter Rex, who survives the killing fields of France in 1916 to return to Australia as a “cripple”. Rex also gallantly moves to understand his country from the point of view of Aboriginal people. The juxtapositioning of the two characters, both enacted by Jamieson, shows their relative challenges caught up in global events. Both show that it’s not enough to have vision and talent as painters but that human beings require a culture in which the value of human life is understood in complex and detailed ways: geographically, culturally, economically and artistically. Indeed this is what it means to live life with a Big hART.