Told by an Idiot’s Get Happy at the Barbican

Our reviewer Josey takes eight-year-old Henry to Told By An Idiot’s latest production, a collaborative adventure-cum-panto-cum-circus show, with a giant egg sandwich thrown in.

Marketing itself as “this year’s alternative Christmas treat”, Told by an Idiot’s Get Happy is positioned to achieve a distinctive style of children’s theatre. Having experienced the show with my co-reviewer Henry (aged eight), I have no doubt that what the company produces is a tour de force of zany and unexpected vignettes that enrapture both children and adults from the instant they step into the Barbican’s Pit Theatre, which is, for this occasion, arranged as a theatre-in-the-round. 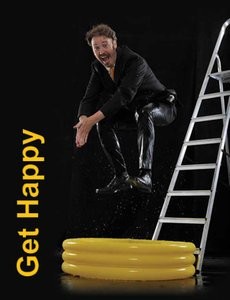 A white passage marks the route into another world: the usher reassures adults that they can take a more conventional route to their seats, but the rush of children towards the gleaming white tunnel caught my enthusiasm for adventure and I bent and shuffled behind with my eight-year-old companion towards a white shimmering curtain, draping the end of the tunnel.

On the other side is the full expanse of a circular stage, painted like a clock face, in striking aqua, black, white and yellow. The design created by Sophia Clist is cartoonish –half Quentin Blake half Dr Seuss, with no hint of fluffy nursery drawings. Around the circular space are striped cushions at the edge of the stage and low benches placed behind them. The seating arrangement is perfect for the way that adults and children will refer to one another’s reactions throughout the forty-five-minute performance as they watch individuals grapple and surmount difficult and inexplicable situations.

Pivotal to the whole experience is the sense of transformation, which Henry followed moment by moment, looking up and around at objects being flown down onto and across the stage. In some ways, Get Happy is a pantomime-cum-circus experience – forms which have a common ancestor in the Italian Commedia Dell’Arte. I refrain from boring Henry with how routines like the restaurant scene derive from comic lazzi, and anyway, he cuts to the chase with a more pertinent point: the show is fantastic, he says “even though there was hardly any words and talking”.

I agree with Henry. I have rarely come across such economical use of language. Paul Hunter (writer and director) creates scenes which undergo a surprising number of variations, controlled by a dreamscape sort of logic. The ensemble of four performers play to their strengths:  Elizabeth Flett as virtuoso violinist and all-around accomplished musician; Stephen Harper as the “sad clown” who – in Buster Keaton style – never gives up the will to overcome the seemingly impossible;  Sophie Russell as the astute and talented prima donna whose elegance masks a grittier determination and the superb young dancer and agile comic Michael Ureta who can effortlessly move from standing position to standing on his hands, perfectly stretched and balanced!

Each episode is an act of transformation and each scene moves seamlessly into the next: the paddling pool scene becomes the restaurant scene (complete with a table with a sawn-off leg) which then becomes the egg sandwich routine. Henry is called on to help pursue a tomato sauce bottle for the egg sandwich. His participation exemplifies for me as a drama educator the value of Told by an Idiot’s approach to children’s theatre. Like Get Happy‘s original use of the variety show episodic structure, the use of audience participation weaves in and out of the whole performance in many surprisingly novel ways, making the work seem more like a thing co-created by the children.

What is more, in experiencing the zaniness of its episodes, the young audience has a good chance of understanding how “get happy” may, in fact, mean many things: moments of gladness, trepidation, excited anticipation, delight, surprise, hope and sheer relief. Happiness can be complex, tense and joyful. Henry was emphatic that I give Get Happy five stars!

Namatjira at the Southbank Centre, London

Told by an Idiot’s Get Happy at the Barbican

Circtacular at The Drum Theatre Dandenong

Shakespeare’s Tempest On The Gold Coast

The Jungle Book at the Lion and Unicorn Theatre