Antic Disposition’s Tempest marks the 400th anniversary of the first recorded performance of the play before James I at Whitehall Palace in 1611. While that venue now no longer exists, the Middle Temple Hall’s direct link to another first performance of a Shakespearean play, Twelfth Night, in 1602, is crucial for maintaining historic and artistic links between the 2011 production and the Elizabethan theatre. 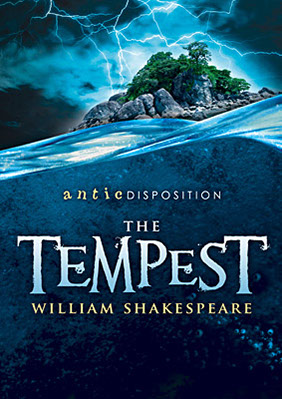 Antic Disposition’s Tempest shows how, as theatre designer Richard Southern’s (1968) claims, the Elizabethan theatre works as a ‘stage IN an audience’. As in the Globe, the performance space in the large, rectangular-shaped Middle Temple Hall is surrounded by the audience on three sides:  ‘the stage’ runs lengthwise from its entrance to the end of the hall, before finishing in front of a tiered seating area. Two rows of seats run parallel along its sides, beginning half way down the hall. This means that hall’s entrance doubles as both the upstage stage entrance and the doors through which the audience enter to get to their seats.

On entering, the audience find themselves ‘on stage’. Arguably, those who know The Tempest’s story see the cargo-like boxes strewn across the area and are reminded of the opening storm scene and shipwreck. Others less familiar with the tale, perhaps just experience the sombre lighting and irregularly placed boxes which make walking in the space unsettling as they decide the direction to their seat. The effect of Prospero’s magic island has begun viscerally and is already affecting a sea change. And so, director, Ben Horslen, and designer, John Risebero proceed to dismantle Elizabethan stage convention by using a mirror image of the Elizabethan stage to reflect The Tempest in contemporary ways.

The storm scene that opens The Tempest is effectively realised through use of a large white rope, which gives form to the both the wild weather battering the ship and the interference by an arrogant group of passengers who impair the crew’s ability to save the ship. The tension between elemental forces and human arrogance sets the tone of the play as predominantly political rather than ‘magical’.

The storm over, the audience now looks upon an argument between a daughter and a father, Miranda and Prospero. Curiously she is clothed in a plain, soiled dress that makes her look wild and unkempt while, her father is dressed in the cleanest and finest of clothes, complete with stunning coat of gold and sky blue. As the play proceeds, the difference in costuming becomes emblematic of Prospero’s relationship with the island and its inhabitants.  By the end of the play, we acknowledge that he is far more like the imperious characters that he seems to have arranged to be stranded on the island with him. By contrast, Miranda’s appearance and demeanour depict her as far more like the two ‘natives’ of the island, Ariel and Caliban.

Richard Franklin presents Prospero with extraordinary restraint. He is a gentle father who is preparing his headstrong daughter to leave the island and return to civilisation. He recognises the island’s effect on her: she is intelligent, strong and self-possessed.  Ami Sayers is stunningly good in the role: every word and movement are expressed with understanding, and she finds new meanings in many difficult passages.

Miranda’s strength also seems to affect the way Prospero is depicted as a magician. This can be viewed particularly through his interactions with Ariel: beginning from Ariel’s report on how he affected the storm through to all his interventions around the island, highlight Prospero’s dependency on him. The end confirms Ariel as the real spirit of the island and the one who enables Prospero to be reconciled to his past life and return to Milan.

Arguably, such an effective overturning of Prospero as the island’s master is made possible by a crucial editing out of the former Duke and would-be magician’s constant and imperious demand that Ariel obeys him since it was his magic that freed the spirit from the witch’s (Scoriax) spell.

Christopher Rowland’s Ariel is inspiring to watch.  His sense of space defines the island, and through him, the audience views the stage magic of moving and lighted boxes on stage. His singing channels James Burrows’ superb atmospheric music that brings another dimension to the play, though it seems as if Ariel is the music’s immediate composer as well as its instrument on stage.

The detailed rearrangement and altering of dramatic conventions seen in the three key roles of Prospero, Miranda and Ariel are evident throughout the production. We see it in the depiction of brotherly relationships (Prospero/Antonio, Alonso /Sebastian). We see it in the relationship between parents and children (Miranda/ Ferdinand), as well as between servants and masters (Gonzalo/ Trinculo/ Stephano/ Caliban).

The strength of Antic Disposition’s ensemble of actors is built on the strength of their clear understanding and use of Shakespeare’s script, imbued with stage direction embedded in its poetic language. Every performer in The Tempest exploited this convention and delivered surprising new meanings to the text. There were no weak performers in this production.

I recommend that Antic Disposition’s The Tempest deserves to be viewed widely, nationally and internationally, achieving well-deserved milestones along the way.  I warrant that it will be one of the best productions of the play audiences will see for a long time.

Richard Southern (1968) The Seven Ages of the Theatre; with line drawings by the author (2nd ed.)

This site uses Akismet to reduce spam. Learn how your comment data is processed.